Download our free guide to the latest salary data, industry trends, and more.

Login to My COC 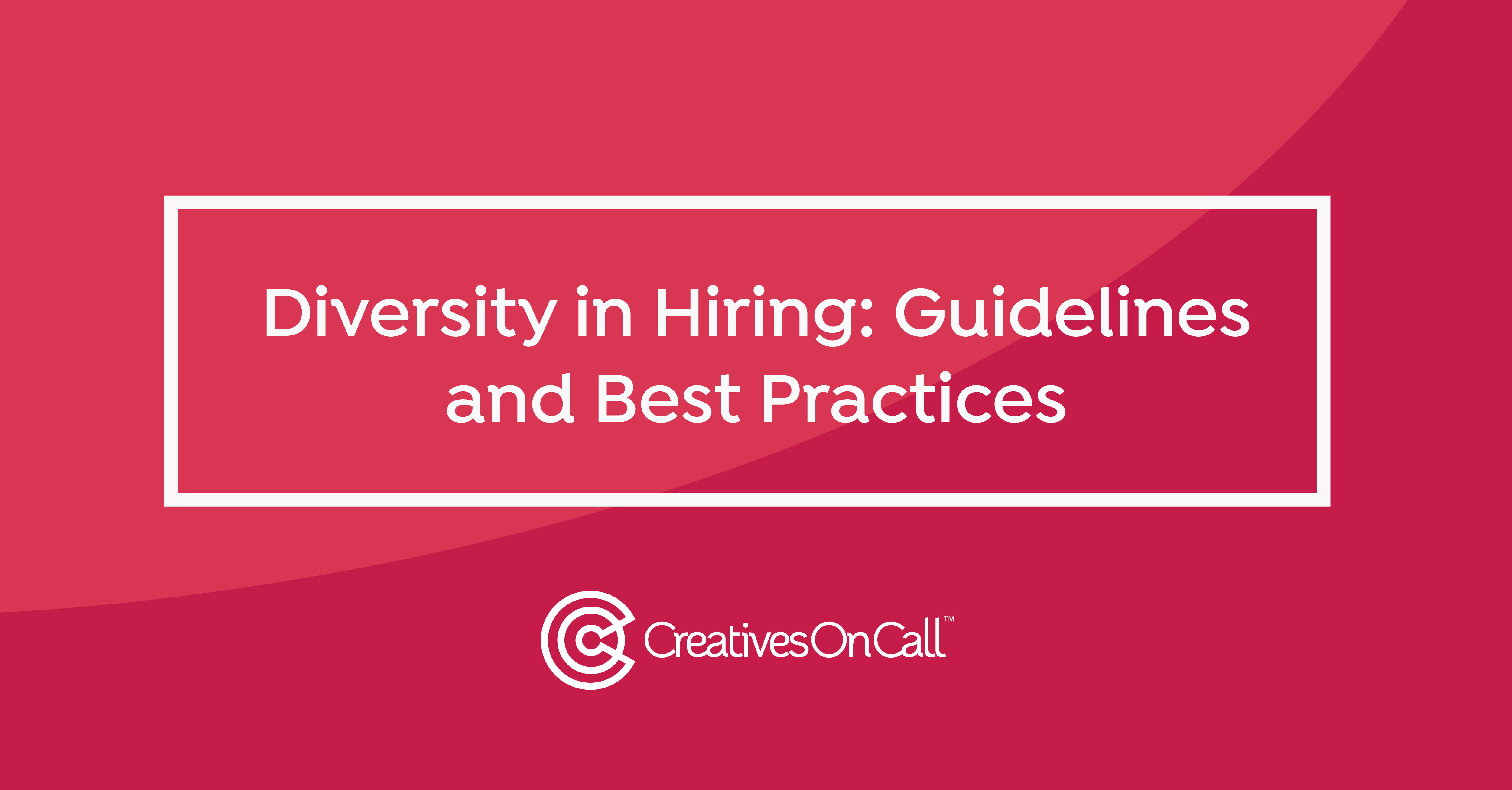 Creatives On Call is proud to support, work with, and hire a diverse population of creatives as well as clients. If you have any questions about the following, we’d be happy to talk to you.

Title VII protects employees against discrimination based on race, color, national origin, sex, religion, and age. It applies to all companies and labor unions with 15 or more employees, employment agencies, state & local governments, and apprenticeship programs.

All companies, however, should promote a culturally inclusive and diverse workplace. But how can a company covered by Title VII ensure diversity without running afoul of the law? After all, “reverse discrimination” claims may also be brought under Title VII. The answer, essentially, is that an employer may purposefully tailor its recruitment efforts and strategies to encourage more members of a certain class to apply for positions with the company and throughout the profession, but a practice of only recruiting or hiring members of a targeted class could cause serious legal problems.

The Cost of Discrimination

From 2010 – 2019, the EEOC received an average of just under 90,000 charges per year, the vast majority based on Title VII discrimination. Of those charges, an average of 44% were based on retaliation against an employee raising discrimination concerns. The latter fact illustrates the very important point that the failure to appropriately handle discrimination allegations can be just as harmful to the company as the initial act of alleged discrimination.

A 2017 survey of 1,214 claims reported by companies with fewer than 500 employees showed that 24% of employment charges resulted in defense and settlement costs averaging a total of $160,000 per claim. On average, those matters took 318 days to resolve.

Clearly, the legal costs of discrimination claims alone should be enough to incentivize any company, regardless of its size, to implement robust diversity and inclusion policies and practices.

However, one should not view workplace diversity and inclusion as simply a way to avoid litigation, but as absolutely necessary to operate a healthy work environment in which the particular biases and stereotypes of any one individual cannot dictate individual decisions.

The purpose of [implicit bias] training is to help us see what we don’t see, help us see our biases, and we all have them…. People think that because they’re nice people or good people, or because they believe in racial equality, or because they don’t feel that they are prejudiced against anyone, that they are not biased. And that is simply not true, because biases, particularly racial bias in this country, is the product not just of personal feelings, but it’s the product of practices and structures and messages and policies that have been part of our country for hundreds of years, and that are still delivered to us every day, and that we all take in.

But then when you expose it, the question is, what do you do with it? How do you recognize it yourself, and how do you manage it?

One of the things that’s most important is having a set of policies and practices that employees adhere to, because at the end of the day, a work culture is the product of the policies of that work culture. And if the policies of that work culture ignore the reality of these biases I just talked about, then they go unchecked, and they’re almost like air, that people don’t recognize that they exist. And the people who then complain about bias are seen as disturbing the environment or disturbing the atmosphere rather than responding to the unspoken that is in the culture.

Every place you as an individual [has discretion] is a place where bias can seep in. Now, we’re not trying to turn everybody into robots, of course. Discretion exists in any job. But to the extent you can have policies that direct people about what to do in certain circumstances, you are lessening the opportunity for individual biases to drive decision-making. But it comes with the recognition that being a supervisor or a manager, having the power to call the police, to close the shop, to decide not to serve someone, all the things that people who are in a supervisory role get to do comes with the responsibility to recognize this reality of bias, particularly in the public space and in customer service in this country. You have to understand the history of it, you have to understand that it exists, you have to understand that is exists in you, and you have to be prepared to be trained to manage it, and then to recognize that as part of the skillset that you have to have as a supervisor.

First, it is important to understand that “reverse discrimination” is not a term used in federal civil rights laws, nor is it actually a separate claim from discrimination based on race, color, or national origin. However, the Supreme Court held in 1976 that Title VII claims may also be brought by white employees discriminated against in favor of racial minorities (McDonald v. Santa Fe Trail Transp. Co., 427 U.S. 273).

The EEOC has recently brought several lawsuits against companies for male discrimination:

• In 2017, the EEOC brought a case against a restaurant chain for allegedly failing to hire male applicants as bartenders because of their sex. That case resulted in a $30,000 settlement for three male claimants.

• In another 2017 case, the EEOC sued a nonprofit child-care organization alleging it failed to consider a male employee for a position in its maternity home program. That case resulted in an $18,000 settlement for the claimant.

• In 2018 a case was brought against a restaurant for failing to hire male servers, which resulted in a 150,000 settlement

• A 2018 lawsuit alleged that a high school softball coach’s contract was not renewed despite his satisfactory performance due to the administration’s stated preference for female leadership. That case resulted in a $41,000 settlement.

• A 2019 lawsuit against an orthopedics practice alleged that the company hired women as medical assistants over more qualified male candidates and retaliated against a male applicant for complaining about the alleged discrimination. That case was settled for $165,000.

In each of the above-cited cases, the EEOC determined the company’s action constituted discrimination against males on the basis of sex, they can hardly be used as an illustration that good faith attempts to diversify a workforce frequently results in “reverse discrimination” claims. These cases are more likely attributed to the fact that employers often rely on biases and stereotypes in their hiring determinations: “Customers want their bartenders to be women,” “men don’t want to change diapers,” “a girls softball team should be coached by a woman,” and “men can’t be nurses.” These attitudes harm the workplace not just because they are discriminatory against men, but because they are indicative of a wider problem: the failure to appreciate the value of diversity and to recognize one’s own biases regarding gender roles.

Review Your Policies for Consistency

You should review your policy to ensure that your standards are clear and nonbiased, and that there are no requirements that could unfairly prejudice a certain group. If you have particular restrictions or requirements that may have an especially negative effect on applicants of a particular race, color, religion, sex, national origin, disability status, or age, ensure that you can justify the practice legally. Additionally, employers should consider whether some other requirement could be equally effective and less adverse to the to the applicant.

For example: if the selection procedure involves a test that routinely eliminates members of a certain class, the employer should determine whether another test would predict job performance but not disproportionately exclude the protected group.

Individual personnel decisions may not be based on a certain protected trait, however, an employer may give such consideration when considering candidates as a whole. Keep in mind that even objective processes may result in a disproportionate impact on a protected class.

For example: an employer chooses to layoff its ten most recently hired employees. Women make up 20% of the overall workforce in the company, however five of the ten most recently hired employees are women. The employer should look at other relevant criteria such as employee profitability or productivity rather than take a “last-in, first-out” approach.

Take a look at things from the inside out. Talk honestly to your employees about the company culture and look for areas of improvements. Personnel practices may go a long way to ensure that your company has a diverse pool of employees and candidates, but an inclusive and welcoming environment cannot be mandated by fiat. A diverse culture must be supported by the entire workforce. Employers must think about diversity as a company initiative that requires the support of the full team in order to be successful.

Keep in mind, the proper way to achieve a more diverse workplace is to purposefully tailor recruitment efforts and strategies to encourage more diverse applicants. Further questions about how this relates to Creatives On Call? Reach out to your Recruiter or Client Services contact, and we'd be happy to help you out. Check out our Facebook channel and LinkedIn account for more updates and helpful resources, daily.

Terry M Cannon, Esq. is a practicing lawyer for a local law firm. He graduated from University of Cincinnati Law and is a member of the Kentucky Bar Association.

A new year brings new opportunities and growth. As you look at your business goals for the coming ye... read more

Though 2020 has felt like a job market roller coaster, some jobs have skyrocketed in popularity, bri... read more

Children & Toys + COVID-19: The Pandemic and the Holidays

Through a year of uncertainty, the holiday season’s traditions are a reminder that though many thi... read more

Welcome to Creatives On Call Connect! Where we give shout outs to artist, share gratitude, chat abou... read more

Kerri's grandmother's famous Cranberry Salad!  ** This takes some time to put together .... but ... read more

Consumer Packaged Goods + COVID-19: How to Keep Up with an Evolving Audience

Using Questioning Strategies to Get you More Opportunities

Senior Recruiter, Kerri Thomas talks about learning the strategy of "reversing" as a technique to he... read more

Goals to Help You End the Year Strong!

We still have 2 months left of the year—that’s plenty of time to cross some goals off the list o... read more

COVID-19 has shifted what’s most important in consumers’ minds. Personal and self-care are a nec... read more

Trends in Employing a Remote Workforce

Remote work and hiring for remote positions have been increasing in popularity over the last several... read more